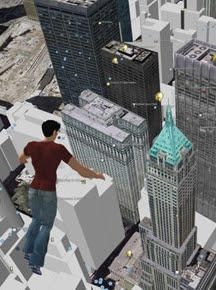 Segue-se um breve excerto. (O artigo, em jeito de história, é longo.)
.
"A thunderhead towers at knee level, throwing tiny lightning bolts at my shoes. I'm standing--rather, my avatar is standing--astride a giant map [SLurl] of the continental United States, and southern Illinois, at my feet, is evidently getting a good April shower.
The weather is nicer on the East Coast: I can see pillowy cumulus clouds floating over Boston and New York, a few virtual meters away. I turn around and look west toward Nevada. There isn't a raindrop in sight, of course; the region's eight-year drought is expected to go on indefinitely, thanks to global warming. But I notice something odd, and I walk over to investigate.
The red polka dots over Phoenix and Los Angeles indicate a hot day, as I would expect. But the dot over the North Las Vegas airport is deep-freeze blue. That can't be right. My house is only 30 kilometers from the airport, and I've had the air conditioner running all day.
"Any clue why this dot is blue?" I ask the avatar operating the weather map's controls. The character's name, inside the virtual world called Second Life, is Zazen Manbi; he has a pleasant face and well-kept chestnut hair, and the oval spectacles perched on his nose give him a look that's half academic, half John Lennon. The man controlling Manbi is Jeffrey Corbin, a research assistant in the Department of Physics and Astronomy at the University of Denver.
"Let me check something," Manbi/Corbin responds (...)"
Publicada por Teresa Martinho Marques à(s) 2:50 da tarde